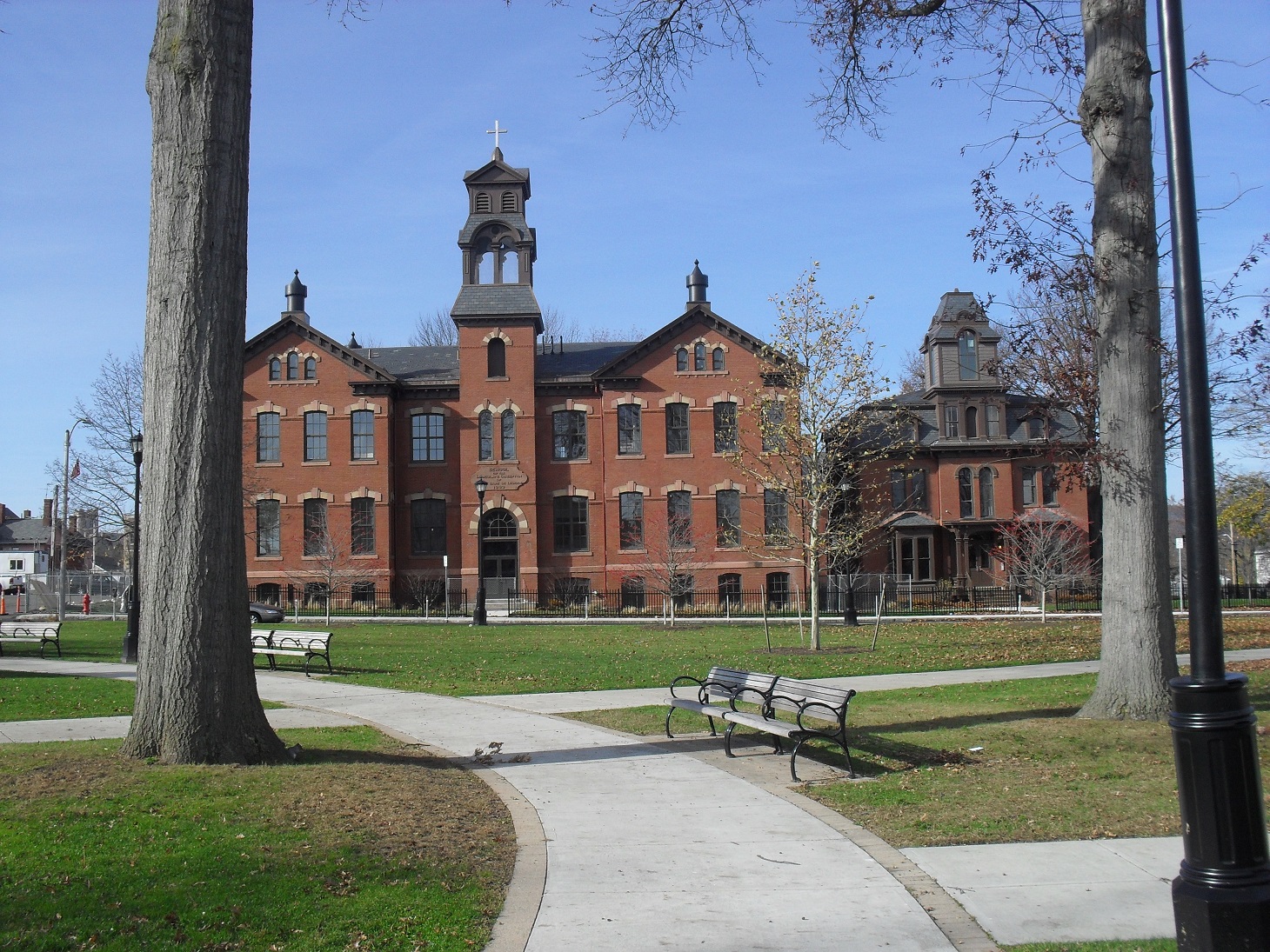 Saint Jerome Church was rebuilt in 1885 since the Irish population of Holyoke had expanded greatly.  The front half was retained but the back half was widen and lengthened.  This church was burnt in 1934 and rebuilt the next year.  The plan was the same but new materials were used except for the bell.  The only visible change was the removal of the clock faces in the steeple.  Saint Patrick’s Chapel was built in 1899.

The first school on the campus was the Notre Dame School.  The teachers were the Notre Dame nuns and a convent was built for them that year of 1869.  The convent remains the oldest structure on the Holyoke campus of St Jerome’s.  The school was a wooden home that was moved from Elm Street to Hampden Street.  This was the second girls’ school in the old Springfield Diocese (Worcester, Hampden, Hampshire, Franklin, and Berkshire).  The first girls’ school was at Holy Name of Jesus in Chicopee. A nun’s chapel was added in 1872 to the back of the convent.  This wooden structure was replaced in 1883 with the brick school Immaculate Conception of the Notre Dame of Lourdes.  The wooden school was moved to Worcester Place and lasted until 1980.

Saint Jerome’s Institute opened in 1872 as the first boys’ school ever in the old Springfield Diocese.  It was a three floor structure. The Sisters of Providence were recruited in 1875 to teach there replacing Grace Harkins – sister of the pastor.  They lived in nearby homes until 1890 when the Convent of Saint Vincent de Paul was built.  The second and third floors were gutted and replaced with an auditorium in 1943.

The Saint Jerome Rectory was finished in 1880.  It is built in the Italianate style.  The first rectory of Saint Jerome’s was at a home on the southwest corner of Dwight and Elm Streets.  Father Harkins did not like it there so he had the new rectory built. Priests who worked at the schools and the church lived there and so did the house staff.  Grace and Catherine Harkins lived there as staff for many years.

William Whiting School was built in 1910 where the North Chestnut Street School stood.  To its north was the Emerald Fire Station which remained there until 1919.  In 1977 Holyoke Catholic High School purchased the school and gradually turned it into their cafeteria and then their fourth building for classrooms.  Across the street from the school is the Quaker Meeting Home.  It was only used as such for 10 years from 1856 to 1866.

House of Providence Charity Home opened in South Hadley in 1873.  It is still there located on Crescent Lane.  It is the first Catholic Hospital in Massachusetts ever.  The House of Providence Charity Home opened in Holyoke the next year. It is the second Catholic Hospital in Massachusetts ever.   It was a wooden structure until 1893 when a three story brick structure was opened at the same spot.  In 1940 a pharmacy was opened behind it.  To the east of the hospital was a home.  This home was bought by Harkins in 1872 for his family.  At first his sister, and then later his brother and parents lived there.  His brother Daniel had a dentist office in the home.  In 1912 the last of his family died and by the next year it was turned into a nurse’s home.  In 1916 a day care or nursery was started in the home.  This was the second nursery in the entire state of Massachusetts.  The nursery was started by the St Agnes Guild of St Jerome.  By 1919 it moved to the James Newton home on Elm Street.

In 1900 the Providence School of Nursing opens at the Joseph Skinner home at the corner of Elm and Essex.  Skinner had moved to his summer home in South Hadley and donated his home to the hospital.  They used it to train and house the nurses.  The new Providence School of Nursing opened in 1938 at the same location and remained opened until 1969.  The Providence Hospital moved to Northampton Street in 1958 and the old one torn down.

The Charles Ranlet home at the corner of Chestnut and Dwight became the Providence Maternity Home.  Thus this entire southern edge of the block was devoted to medical needs.  Next along the block was a dentist’s home.  It was between the Ranlet home and Holyoke Catholic.  This was the home of Daniel Murlless.  Murlless had his dentist office at the southwest corner of Maple and Essex which also functioned as a dental supply company.  He had many patents including ones for a dental dam and a dental bridge.

Lastly is the Notre Dame School.  Built in 1883 as a girls’ school, it continued to expand for years.  By 1895 some high school classes had been added.  In 1910 the Saint Jerome High School opened within the building.  There were no graduate until June of 1916.  An important change at the school caused this.  In 1912 the Sisters of Saint Joseph took over at all the Saint Jerome Schools.  They were devoted to education unlike the other group of nuns.  Thus they were better teachers and the students learned more.  The main convent was also renamed and the second convent was turned into administrative offices and classrooms.

Saint Jerome Cemetery was expanded in 1904 from its original expanse along Saint Jerome Avenue to include all land to Northampton Street.  Father Harkins, his parents, his brother Daniel, and his two sisters Grace and Catherine are buried in the same family plot.  It is located along the only north-south crossing road.

St Jerome Temperance Hall was located along Maple Street.  It was founded in 1868 and Father Harkins was made the spiritual head. The group is called Saint Jerome Total Abstinence Mutual, Benevolent, and Literary Society.  The hall had a musical group, a library, and more.

Other churches were started in Holyoke with Saint Jerome as the mother church.  Sacred Heart, St Patrick’s in South Hadley, and Holy Cross are all direct ancestors of St Jerome.  Rosary, St Anne in Chicopee, Blessed Sacrament, and Holy Name are indirect.  Some would start schools like St Jerome’s did but none would have the full program and great impact of St Jerome’s Church.

Brightside and Ingleside were offshoots of St Jerome.  In the future I will have a full treatment of this site.

St Jerome’s Church was the most complete parish in the old Springfield Diocese.  There was no institution that could be formed that was not formed.  Its parish priest Patrick Harkins and its strong congregation formed a church campus without rival in the area.