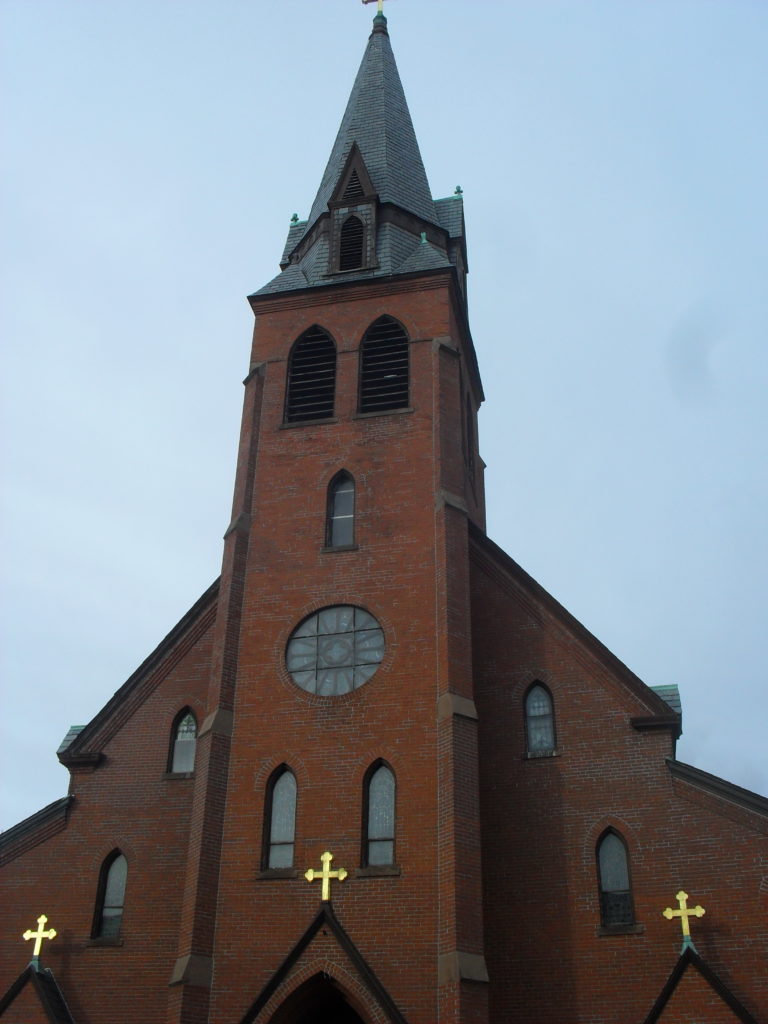 Mater Dolorosa Parish started in 1896 when Antoni Sikorski came to Holyoke.  He led masses in the basement of the new Holy Rosary Church until 1903 when the Mater Dolorosa Church was finished.  He only said mass for a few months before he had medical problems that led to his death in April of 1903.  He died in the rectory attached to the church.  His sister Bronistawa was his housekeeper and she brought him back to Poland.  The parish could not find a new pastor until the next year.

Mater Dolorosa Church is on land that once was home to the Yellow Block.  This was a two story tenement house with store that was along Lyman Street.  It perhaps was a yellow color similar to the building now across the street from the church – this building is called the O’Connell Block.  At the corner of High and Lyman Streets is a building called the Gaullaudet Block.  This was built in 1847 and thus is one of the oldest buildings in Holyoke.  The back of where the church was to be was the John M O’Connor livery stable.

From 1890 to 1896, the Polish of Holyoke did not have their own parish.  The used the Rosary Parish Hall as their place of worship for those 6 years.  They did not have their own priest.  Franciszek Chalupka of St Stanislaus’s Church in Chicopee cross the river to be their pastor on Sundays.  This was the start of many churches in Holyoke helping out the new immigrants from Poland.  Whether it was Holy Rosary in the beginning or Precious Blood and Perpetual Help by the 1920s, there was great help coming their way.  This is unusual for different ethnic groups in Holyoke which was prone to battles and quarrels between ethnic groups.

Father Tarnowski had a building between the rectory and the school renovated into a convent.  This convent lasted from 1906 to 1911.

(Behind you at stop B) – The neighborhood of Union, High, Maple, Chestnut, and Elm Streets were filled with many tenement houses.  During the urban renewal of the late 1960s, two streets were removed – Union and Prospect.  Two high rise apartment buildings were put in – Pulaski Heights and Prospect Heights.  These were built in the Brutalist architectural style of the 1950s and 1960s.  The last of Thomas Dillon’s tenement houses and stores was removed in the 1980s when Kosciuszko Park was built.  The middle of this park holds memorial stones to the Polish American soldiers that lost their lives in World War II.

Father Tarnowski founded the first school for the parish in 1906.  The final chapter in the school history happened in 1958 when the original school was condemned and then in 1959 removed.  The old Perpetual Help Church was taken down and up went the newest Mater Dolorosa School which is still functional.  The Mater Dolorosa School faced onto Prospect Street at first but since the urban renewal days of the late 1960s it has faced into Pulaski Park.  That is Prospect Street was removed.

The school grew in the number of students very rapidly and by 1911 a new convent (E and F)and a school annex (D) were needed.  These are where the Pope John Paul II Hall is.   This annex was not needed by 1928 since the Perpetual Help Complex at the corner of Maple and Prospect Streets became part of Mater Dolorosa.

The Mater Dolorosa Rectory started at the newly built church attached to its back and still is there.  The convent for the St Francis nuns however wandered around in the early years.  By 1953 they gained a permanent and beautiful building at the corner of Fountain Street and Maple.  This location was where the second Perpetual Help Rectory was.  The rectory location was were the home of the McCoy family was.  The first Perpetual Help Rectory was across Maple Street but was given up in favor of this large home in 1896.  From 1890 to 1896 the rectory was at 20 Maple Street in a brick home.

The immigrants from Quebec and from Poland lived close together in the early 1900s.  This is unusual for Holyoke and might have been because they bonded over similar language issues and similar mentalities.  The priests of Mater Dolorosa, Perpetual Help, and Precious Blood in the 1910s were all friends with each other.  Their names are Casmir Cwiklinski, Joseph Marchand, and Charles Crevier.  Marchand was selling property to Mater Dolorosa for low cost.  Crevier gave his summer family home and land in Granby to the Franciscan Friars for free.  The Franciscan used this benevolent gift to build the St Hyacinth Seminary and College.  All the priests of Mater Dolorosa have been Franciscan Friars except for the first.  Many of them have had their training at this Granby Seminary. 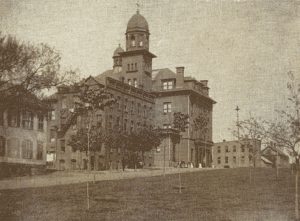 The Perpetual Help Church was an important part of the history of the Mater Dolorosa Church campus.  It was built in 1891 as a five function structure.  It had all but the rectory in it.  The convent, school, auditorium, church, and chapel were all in one building.  I wish I know which floor held which function.  So far I know that the first floor is the church and the second and third floors are the classrooms.

In 1895 the pastor Charles Brunault had the organ installed.  It was a Casavant Brothers of Saint Hyacinthe Quebec opus 63.

Starting in the early 1920s, the parish moved to the block SW of the Holyoke Library.  For a full treatment of the parish see this LINK.  In 1928 when Mater Dolorosa took over the building, it changed the functions to classrooms, social hall, bowling alley (basement), and auditorium (first floor).  It was renamed the Mater Dolorosa Parish Recreation Hall. 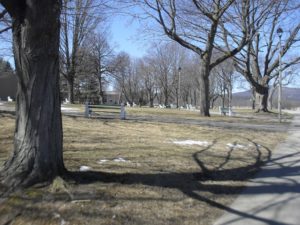 Pulaski Park was once called Prospect Park.  In 1884 it was designed as a city park with large greenways.  In 1903 it was redesigned by the Olmstead Brothers with a parapet wall.  Beyond the wall are the railroad, river, canal, and dam.  In September of 1939 the park was renamed in honor of the American Revolutionary War hero Casmir Pulaski.  In 1974 the eastern lower park was put in first as a ball field but now as a skate and spray park.  To read more click on the Prospect Park link just above.

In 1892 the Notre Dame Cemetery of South Hadley was laid out.  Perpetual Help Church gave a small plot to Mater Dolorosa Church in 1906 at its northwest corner.  Previously, Polish burials were in any nearby Catholic cemetery to the dead person.  In 1934 a quarter of Notre Dame Cemetery was sold to the Mater Dolorosa Church.  Many of the old burial stones are still present in that original 1906 plot.

Walk around the beautiful neighborhood to enjoy the fine sights.

Kosciuszko Benefit Society was started in Holyoke in 1893 only 6 years after the first Polish came to the city.  By 1899 it was also a social club and in 1913 it had its own building on Union Street.  This building had two floors one of which was a social hall for weddings. Thaddeus Kosciuszko was a Polish general that helped the Americans fight in the Revolutionary War.  In 1971 the hall was removed.  A similar function hall was built behind the convent.  It is called Pope John Paul II Social Hall.  Fountain Street was renamed to St Kolbe Drive.  Father Kolbe was a Franciscan Friar that lived in Poland.  He helped over a thousand Jews escape from Poland during WW2.  He was caught and imprisoned in a concentration camp.  A group of 20 men were singled out for starvation.  He offered to the Nazis to let him take one of their place.  After 30 days in a holding cell he was the only one alive.  At that point he was given a lethal injection.  He was declared a saint by the Catholic Church due to this act of martyrdom.