Whiting Street Reservoir was made from the watershed of Roaring Brook in 1888.  It is made of a sandstone dam with a dirt berm.  The entire area is full of history but the greatest view is that of being in the shadow of the Mount Tom Range.

The packed dirt road that surrounds the reservoir was put in 1897 both to help maintenance workers and to allow visitors to visit the many sites around the reservoir.  In 2018 the cross country course that is on this road was renamed to Rudy Lengieza Cross Country Course. 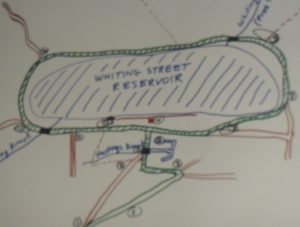 This was the first dam-based reservoir of Holyoke but its third dedicated source of water.  The water of the reservoir served as a drinking source for Holyokers until into the early 1990s.  Now it is just a backup source.  Below is my historical and geographical tour points.  Use the map.

At the crossing of Kenilworth Road and Mountain Park Road there is an old road leading west.  This is the remnant of the entrance to Whiting Street Reservoir.  It once led to the reservoir but in 1963 when the interstate highway was put in, the Reservoir Road was partially taken out.  The Kenilworth Castle was to the south.  The stream nearby is the end of Roaring Brook which soon crosses Northampton Street and empties into the Connecticut River.  This entrance had a large castellated gate from 1912 to 1963 but it has mostly been removed.  In 1914 an iron pipe fence lined both sides of the road from this gate to the reservoir.  The iron gate across the road was added in 1920. 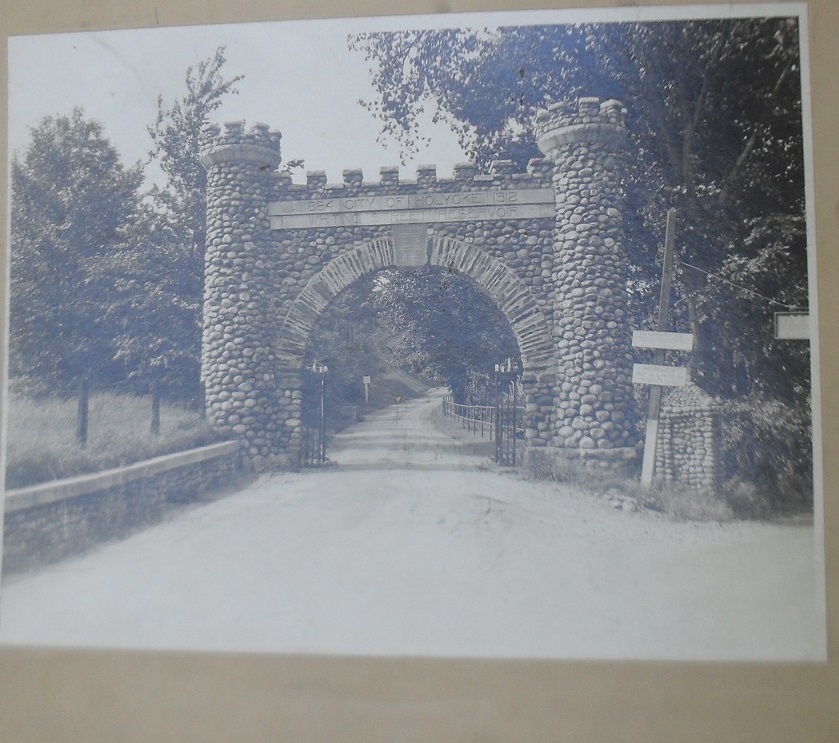 Part of a surface pump and some walls are still here.  This road is the property of Holyoke Water Works so you may walk up it but it only leads to a fence on the interstate.  Another dirt road leading north was constructed in 1915 to lead to Mountain Park.  The tar road to goes to the park and reservoir was made in 1965.

The old road and trolley line to Mountain Park Amusement Park came through this point.  The trolley line from Holyoke was put in in 1897 and the access roads from Holyoke and Northampton were put in in 1929.   There is an entrance and an exit gate located on the highway.  If you look carefully to the east of Mountain Park Road, you can see the support piers for the trolley to elevate the cars over a gully.  The tar road for cars was a bit more to the north. 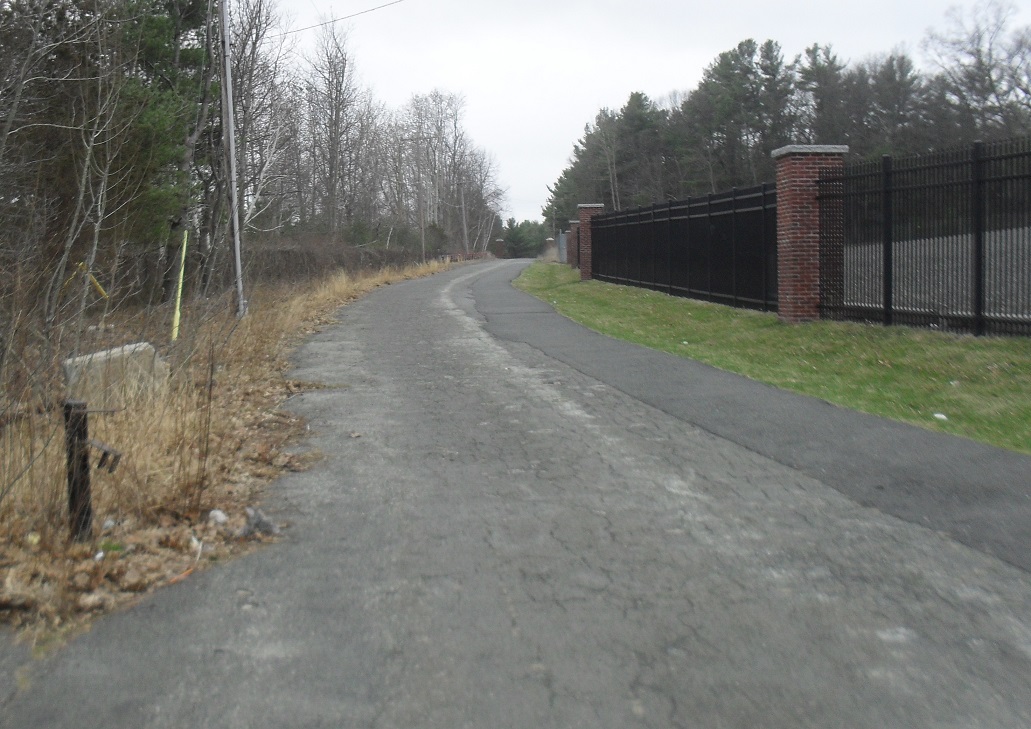 It is obvious what they led to.  The ski area is only a mile away from this point.  The Mount Tom Ski Area Road also leads to an access road to climb the mountain.  The trolley bed as one time passed close to here.  The road to the reservoir was made in 1963 and is called Aerator Road. 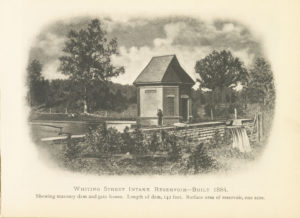 (Image is courtesy of the Holyoke History Room at the Holyoke Public Library.  It is from a booklet called “Souvenir by the Holyoke Water Works”.)

Roaring Brook passes under Aerator Road and is visible on both sides.  It now has a culvert under the interstate.  Notice the fluoridation and chlorination station to the south built in 1965 and 1970.   This is the second chlorination building along the road with the first being built in 1941 but removed in 1965.  There is a municipal pipe below your feet that leads to the downtown Holyoke, the Highlands, Smith Ferry and the Flats.  The grassy knoll to your south is the former Intake Reservoir.  Its masonry dam is apparent at two locations if you look carefully.  The original entrance road is below the knoll.  The dam of the Intake Reservoir is 141 feet long and 15 feet high.  It is 12 feet thick at its base and 7 feet thick at it top.  It was built in 1884 to 1885.  After the larger dam was built, it served as a location where sediment in calm water could settle.  A guard house was added to the top of the dam at some point and in 1919 it was rebuilt due to a fire.  This guard house was only removed in 1976.

Hastings Brook is found at the crossing of a brook over a small footbridge.  This brook at one time caused much problems with the water being piped into Holyoke.  It used to flood when either the brook or the spillway was very active.  Its suspended load of silt and clay would get into the Intake Reservoir and cause the water to have a high turbidity.  This problem was alleviated when a small dam was placed under the crossing. 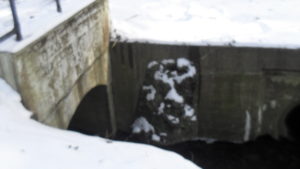 There is a concrete canal from both the control house and from the emergency spillway.  They meet in the brush and then go the east where we just were.  The two pipes from the control house are deep under ground.  It leads to its surface point in one of these channels.  There was an aerator with a fountain on the grass near this point.  It was put in in 1909 as a help to kill certain bacteria.  Oxygen in water does help it taste better.  Some parts of the aerator are still visible if one looks carefully. 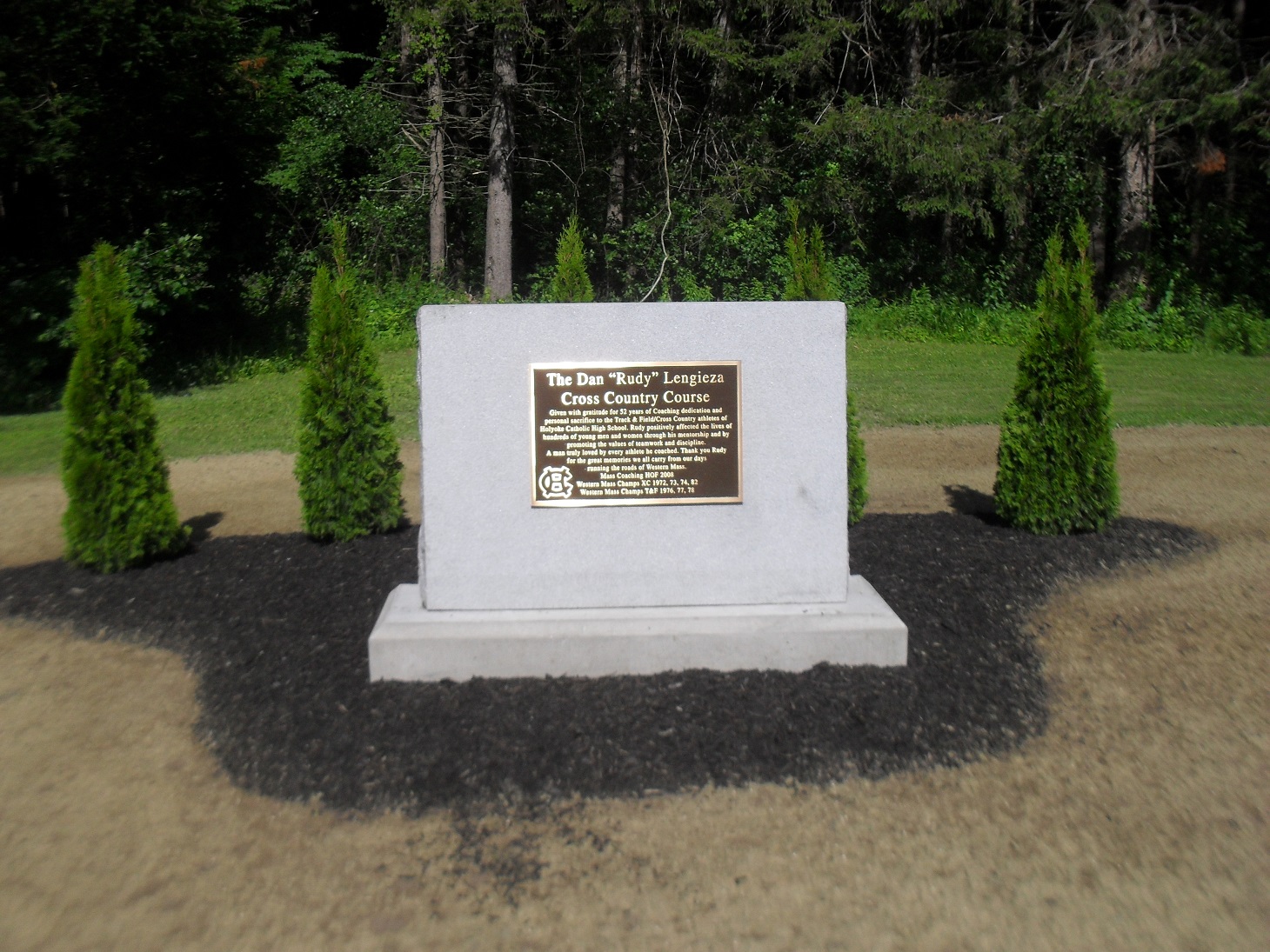 The cross country course around the reservoir was used by high school runners from 1970 to 2015.  It was renamed in honor of Daniel Lengieza – the coach of Holyoke Catholic High School cross country and track for 52 years – in 2018.  Notice the plaque in his honor.

The Holyoke Catholic Cross Country Course starts here.  It is 2.72 miles to the end point back at the stairs near the control house.  The course was used for 46 years as their home course.  About 40 feet back from this point, there was the original road that circumnavigated the reservoir.  It is the only part of the road that has been detoured.  It originally led to the Mountain Park area. 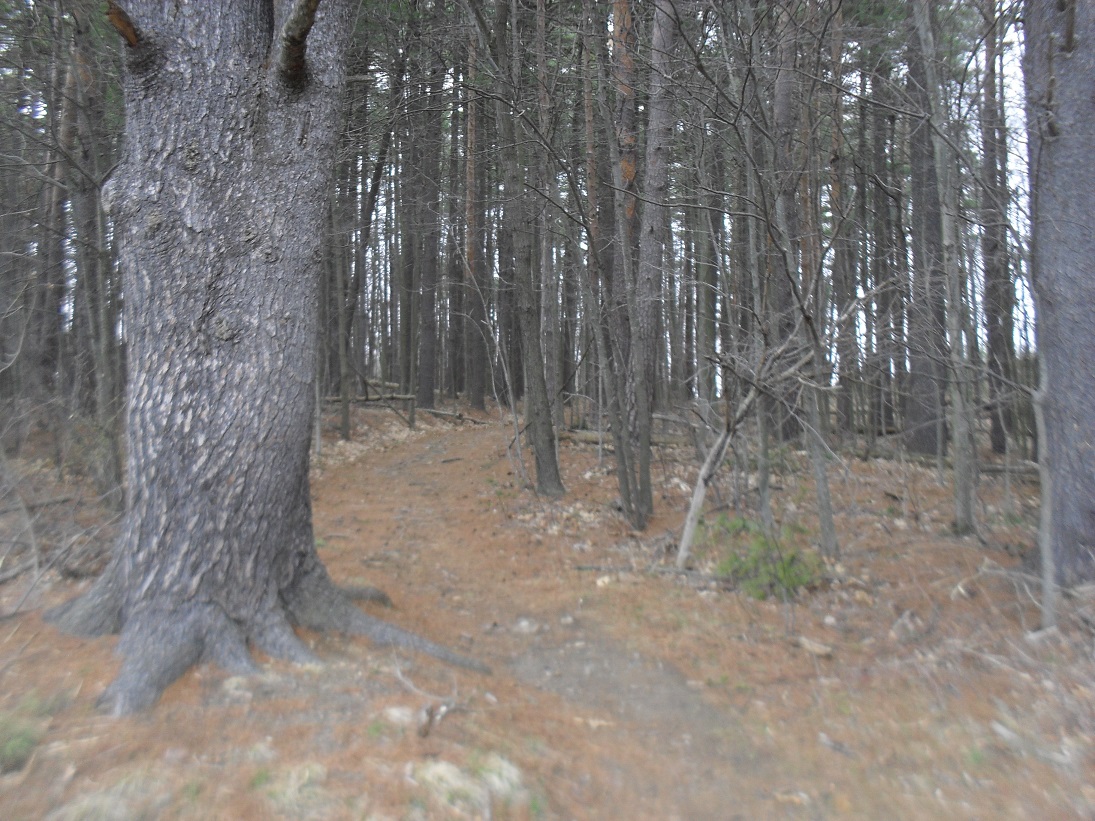 In 1909 and 1910 the new path was put in due to the congestion of parked vehicles visiting the Park.  Mountain Park was started in 1897 as a deer park and theater.  It was a trolley park.   The only road entrance to the park was via this road until 1915.

Mountain Park is 200 feet to your east.  This side trail was once the original path.  Mountain Park was a animal park and a theater area under William Loomis. 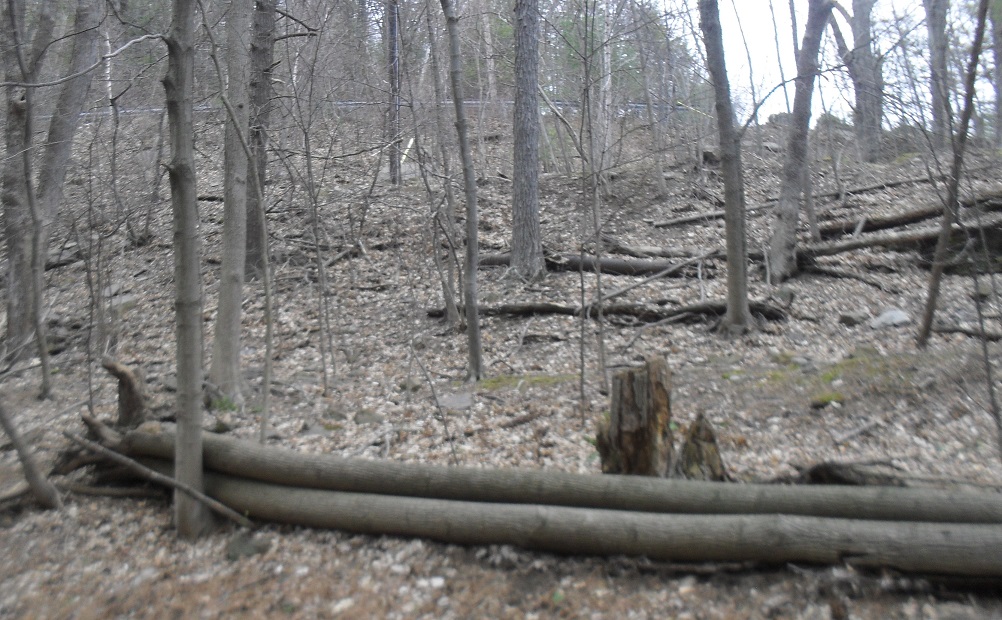 In 1929 it changed to a park with many large rides such a roller coaster (under Louis Pellessier).  In 1952 it changed again into an Art Deco amusement park with a midway under John Collins.  Now concerts are held there.

This path leads to the top of Mount Tom.  The old trolley bed is found up this trail also. To get to the mountain road walk this trail and then 10 feet along the tarred road and then a sharp left to climb the mountain about 2/3rd of the summit. 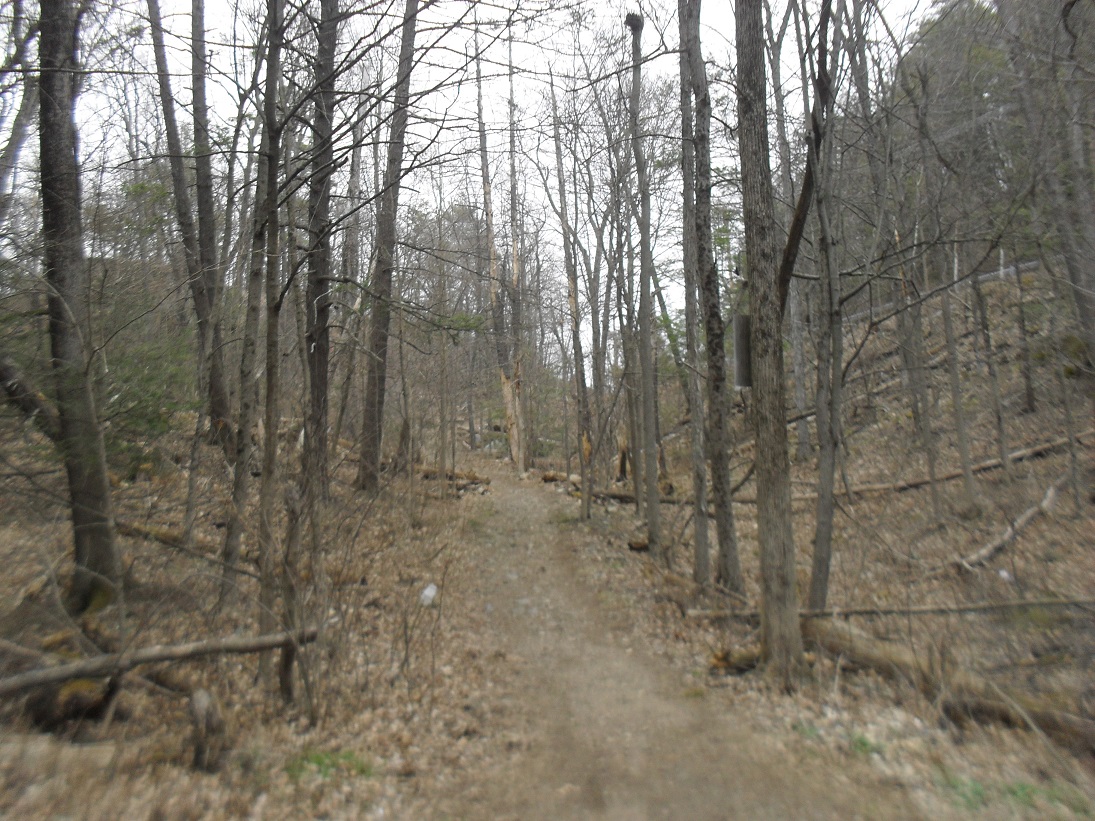 There on July 6 1946 a B-17 transport plane crashed with all 25 men dying.  There is a monument on the mountain for these military men.  Beyond the mountain access road is the Mount Tom Ski Area.  It started in December of 1960 for downhill skiing.  Decades later an alpine slide, a wave pool, and a water slide were all put in.  In 1998 all closed.  About 10 feet south of the point 8 on your map see the end of the Whiting Street Brook.  Whiting Street was a farmer and investor who at his death in 1878 had left a trust fund to many communities.  The Reservoir is named after this person.  The brook lead to Loomis Reservoir on the mountain.  The sides of the brook were added in 1911 and the concrete bottom added in 1937.

Sheldon Avenue was built in 1914 and is 1600 feet long and has easy grades and curves.  Sheldon Avenue to Easthampton Road was once fully gated both here and at its highway entrance.  These gates had swinging gates added in 1920 to prevent the public coming in when the road was soaked.  By 1922 the gate was permanently locked. 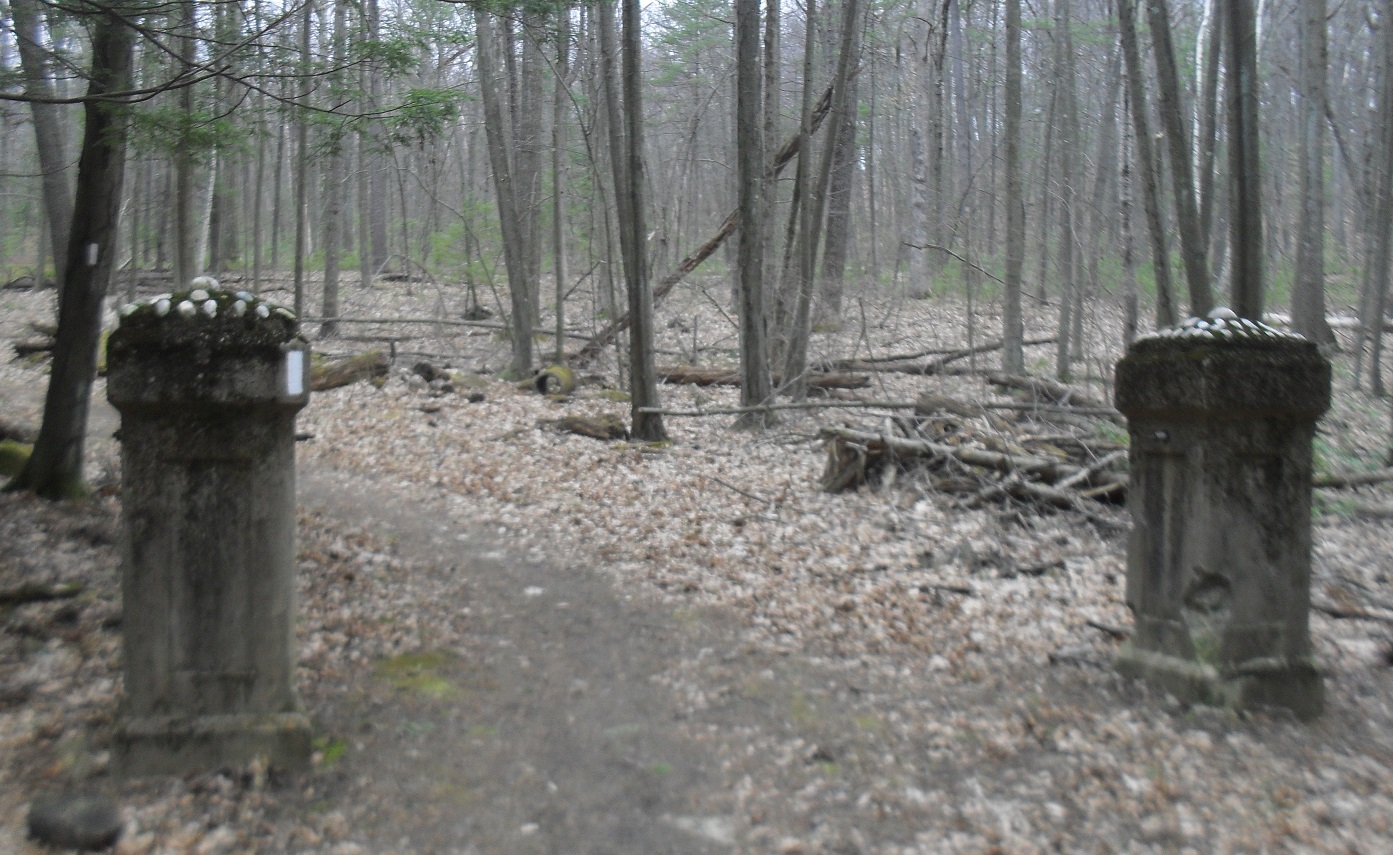 It led to Route 141 but is now part of the Metacomet Monadnock Trail (part of the New England Trail).  The road was named after Jesse Sheldon a water commissioner.  The entire Mount Tom Range is a State Reservation since 1903.  There are three trails that lead from the reservoir into the Reservation.

Notice the modern Wyckoff Golf Course.  The steam coming out of the golf course is Roaring Brook.  This is the stream that forms Whiting Street Reservoir.  It starts near Jarvis Avenue and feeds most of the water entering the reservoir.  The road leading south is the Albert Steiger Road. 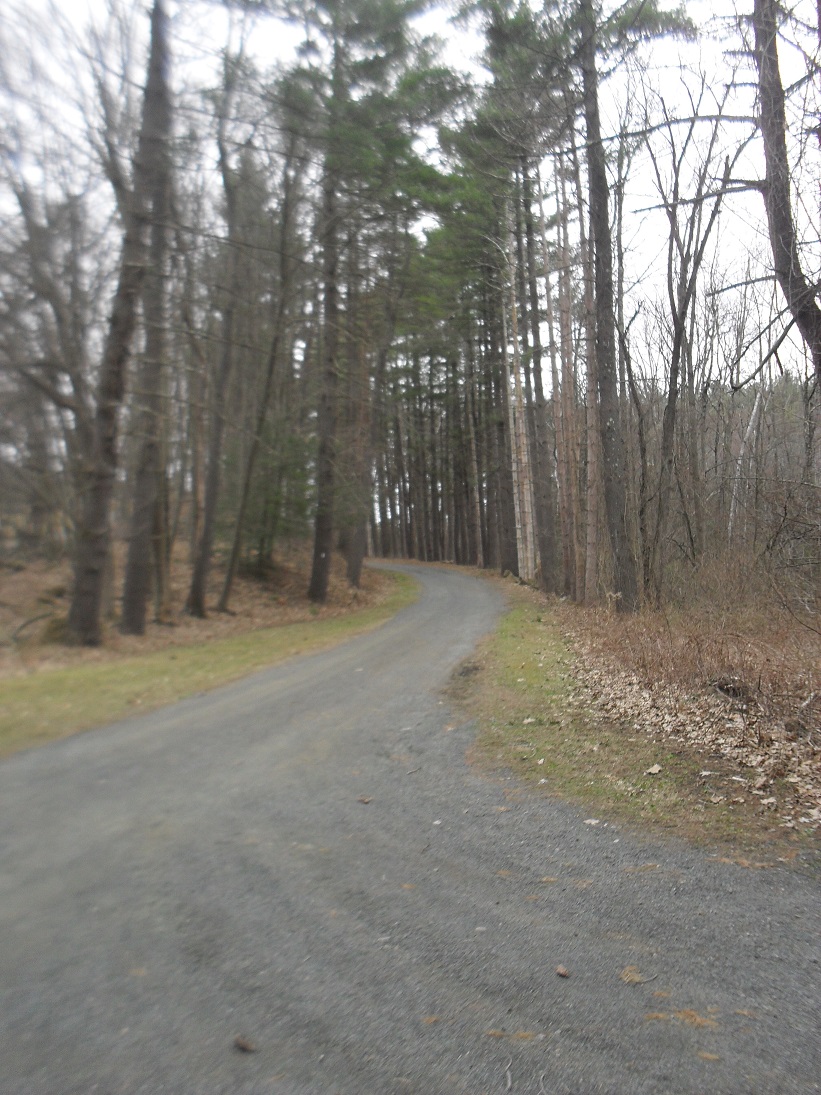 It was built in 1931 on land granted to the Holyoke Water Works by his will of 1929.  The road was improved with side gutters but during the Hurricane of 1938 the road and gutters were destroyed. This road meets Easthampton Road in three fourths of a mile.  Just beyond that crossing is the Old Easthampton Road. There is a long ornate gate at this old road.  This gate that is still there was built in 1937 as a WPA Works Progress Administration Project.  The brook 100 yards north of this road is the Roaring Brook that feeds the reservoir.  The bridge over it was replaced in 1962.

This is the entrance to the old Mount Tom Golf Course.  The course was six and then nine holes until 1922 when it changed to 18 holes.  A two lane road passed from here to Northampton Street. 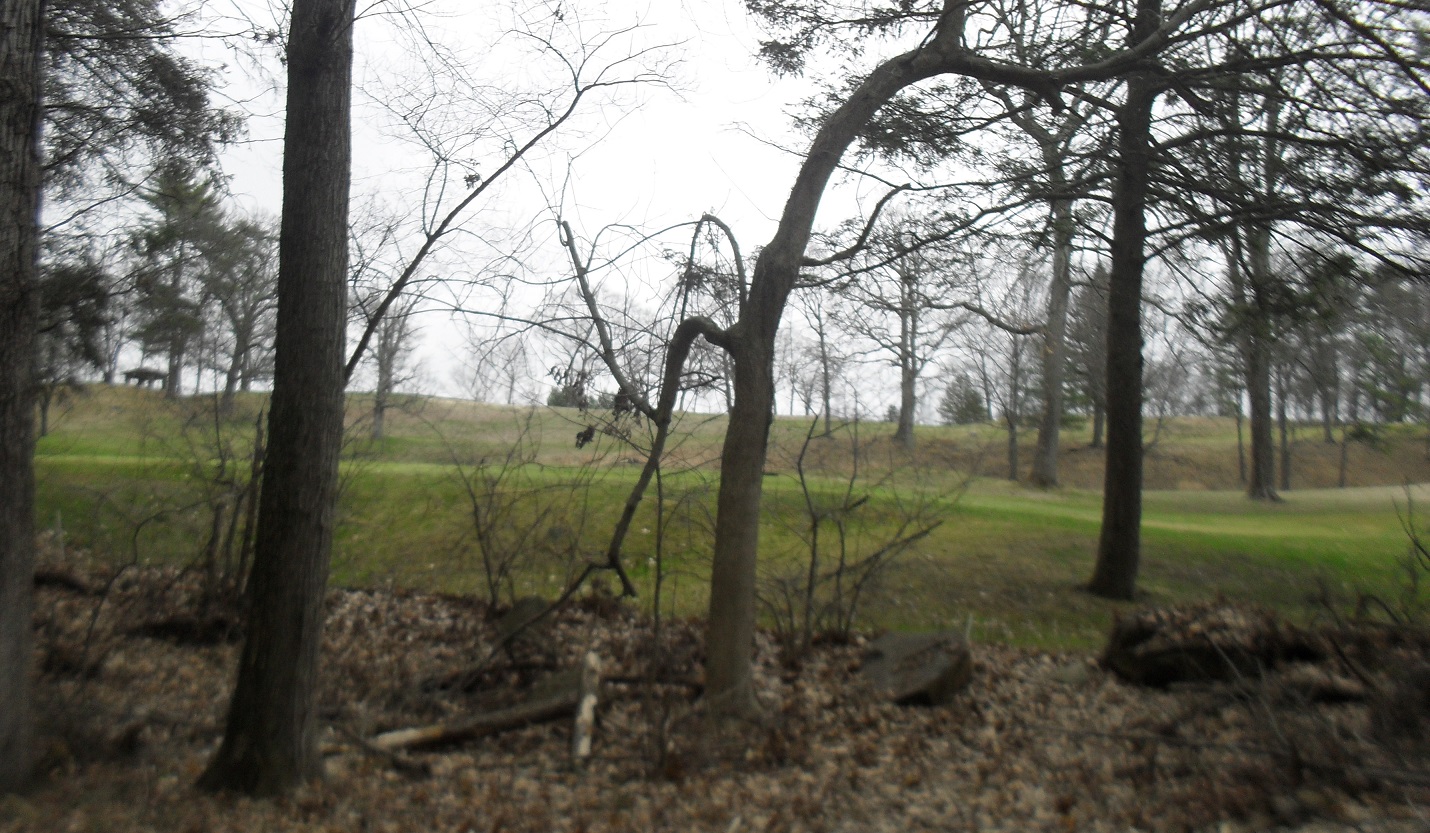 In the 1930s it was renamed to Wyckoff Golf Course.  The course changed drastically in 1965 when the interstate was made to pass through it area.  The dirt roadway was the transport axis of the course.  Also golfers from Easthampton could come from Sheldon Avenue to the course via the reservoir.

The spillway is only for the overflow of water.  It enters over the small dam and is channeled until it meets the water coming from the control house. 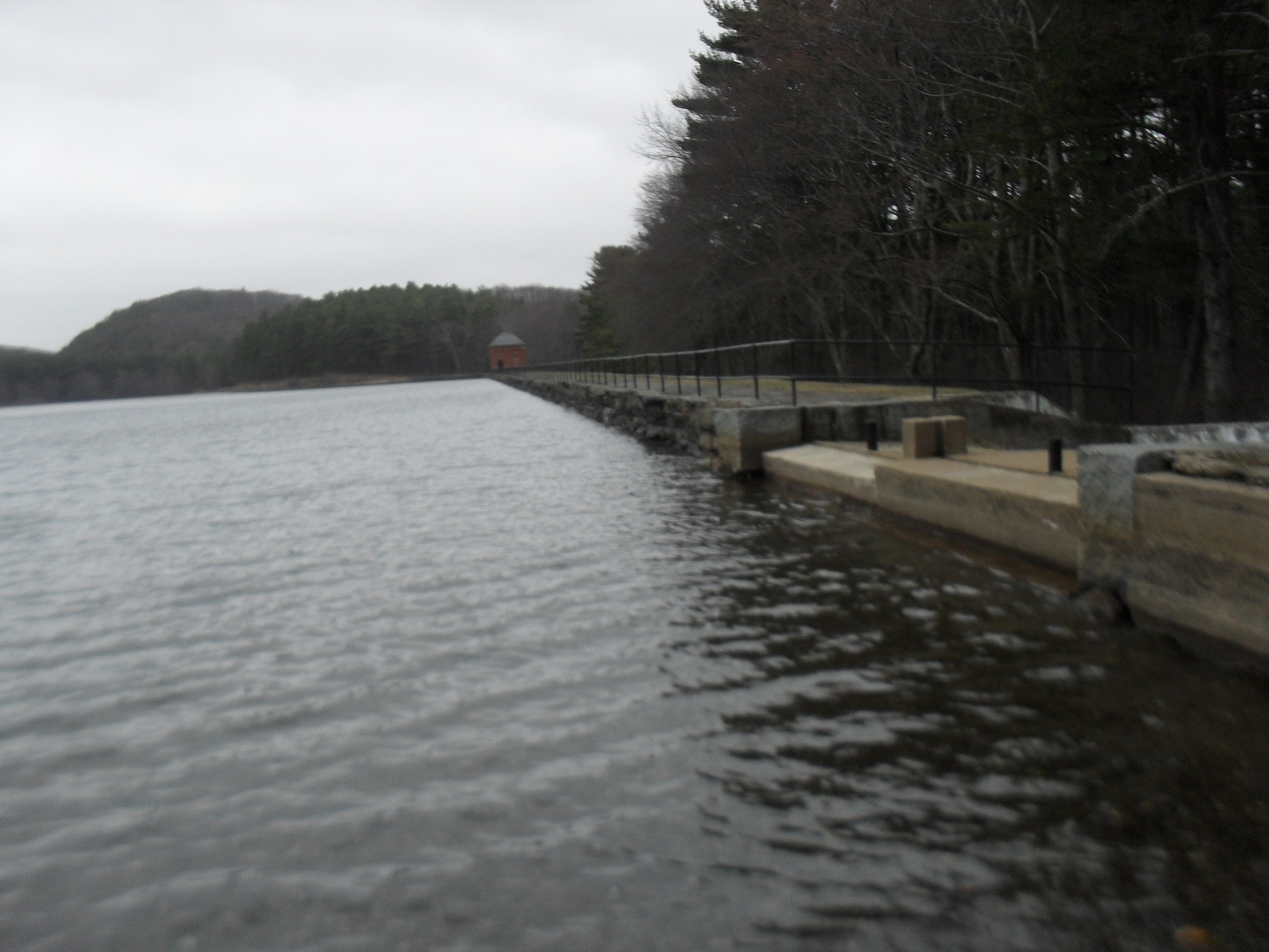 The dam is 1773 feet long, 21 feet high, and is made of sandstone and concrete.  The reservoir has half a billion gallons of water and covers 114 acres.  Its watershed is 1.5 square miles.  October 18-19 1955 Holyoke experienced the greatest rainstorm that has ever hit New England.  19 inches of rain fell on this part of the city within 24 hours.  This was the rain from Hurricane Diane that had come up the Hudson River and then passed over the mountains of Western and Central Massachusetts.  Holyoke Water Works feared that the dam would collapse during the height of the rain.  It activated an emergency pipe (12-inch diameter) that is still visible in the berm of the dam (about 40 feet from this spillway).  This led to Hastings Brook and then to a larger pipe (36-inch pipe) that parallels the entrance roadway.  This pipe once led all water from the spillway, the emergency pipe, and from Hastings Brook 488 feet downhill into the concrete structure at the intersection with Roaring Brook.  However, the Lower Intake Reservoir was overwhelmed and a flood of water cascaded down Whiting Street Road to Northampton Street.  The intersection there was destroyed.

The control house has water pipes deep underneath it. 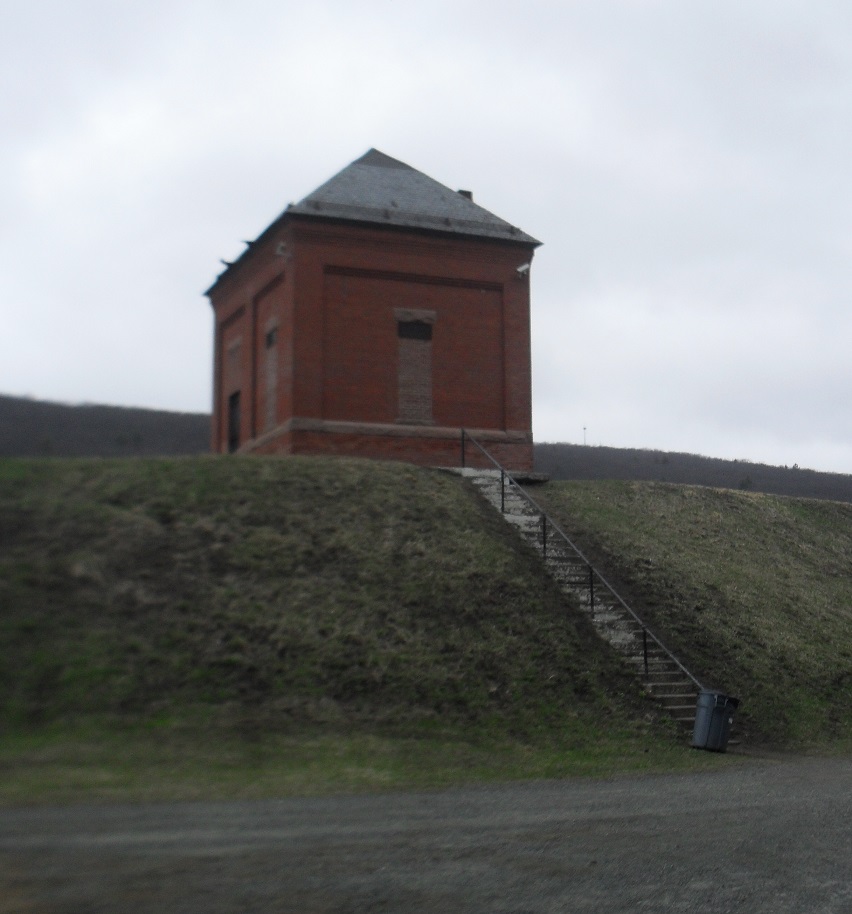 The pipe is even lower than the roadway below you.  The view is beautiful in front of you but the important job of providing drinking water is done beneath your feet. The grass and dirt berm was added from 1929 to 1931.  It was destroyed by Hurricane Diane.  It was repaired the same way as in 1931 by draining the water and scooping out the dirt.