Water need in Holyoke has always been very high. It is an industrial city and thus not only the population but also the mills need lots of water. The mills make fibers and paper both of which are combustible and thus the mills of Holyoke have the highest mill fire protection in the country during the city’s industrial era.

Water need was so great in Holyoke that the water board would often looked into other sources far from Holyoke. For example, there was talk of building an aqueduct across the Connecticut River from South Hadley to Holyoke in order to pipe Quabbin water into the city. One proposal was to build a bridge from South Hadley to Holyoke from the Batchelor Brook to the Smiths Ferry neighborhood.

Specifically, in the summer of 1894, the water level in the Whiting Street Reservoir was only 9 feet and the other reservoirs were low too. There was a discussion of placing a pump and pipe system into the Connecticut River and pumping more water into the Whiting Street Reservoir. Clearly, such a conversation included diseases such as typhoid being sent into the reservoir in this way.

There was often much talk about connecting a pipeline from Chicopee into Holyoke and from West Springfield into Holyoke. These were actually built compared to the other schemes. From 1942 to 1943 the line to West Springfield was completed to their pipes. In 1957 West Springfield started selling some water to Holyoke but I do not know how long and to what extent that arrangement lasted. The Chicopee water line was laid on the north side sidewalk of the Willimansett Bridge. (some of that work was done in 1942)

Over many years also there was the examination of whether or not Holyoke should install water gauges in homes. In 1907, test meters were put into over a hundred homes to ascertain water usage and benefits of meters. Would the cost of the meters be worth it?

The Holyoke Water Works has an independent budget from the City of Holyoke with the only restriction being that it cannot make a profit. The history of water use is well explained in the annual city reports of Holyoke. I will give a few examples below.

In 1920, there are 97 miles of mains. In the city there are 785 hydrants. Usage numbers show that the most water is used in August and the least in December.

In 1931, there were 120 miles of cast iron pipe mains. There were 1,705 Chapman gates to control the water in these pipes. There were 851 public hydrants and 296 private hydrants. 2.706 billon gallons of water was used. That is 132 gallons daily per capita.

In 1957, 3,146 million gallons of water was used in Holyoke. 31 MG from the West Springfield pipeline and 49 MG from the Chicopee pipeline. West Heights used 39 MG. Wyckoff Park District used 7 MG. There were now 142.9 miles of main in Holyoke.

Fire hydrants are very important to Holyoke since there are so many mills and so many tenement houses. Some of the brands of hydrants are Mathews, Pattee, Perkins, and Holyoke. The Holyoke Water Works bought out the Holyoke Hydrant and Iron Works Company (on Commercial Street) in 1896. This firm had been around since at least 1885. LINK

Specialty equipment was also important to the water works. For example, in 1904 a 16 inch Premium Venturi was installed at the reservoir. In 1918 a Cole Recording Pitometer was purchased. This used a pitot tube and a static tube to measure the water pressure. In 1951 a portable chlorinator was purchased and used in several of the reservoirs.

The booklet Souvenir by the Holyoke Water Works made in 1904 gives nice images.

Dimensions of the Reservoirs 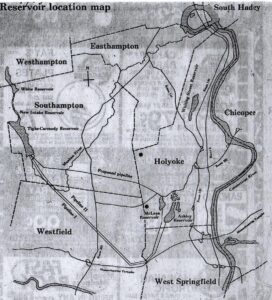 map from the Holyoke Transcript

Other Reservoirs in Holyoke

Holyoke Reservoir System after the 1955 Hurricane

In 1931 a 100 thousand gallon water storage tank was built off of Jarvis Avenue.

Superintendents of the Reservoir System of Holyoke: