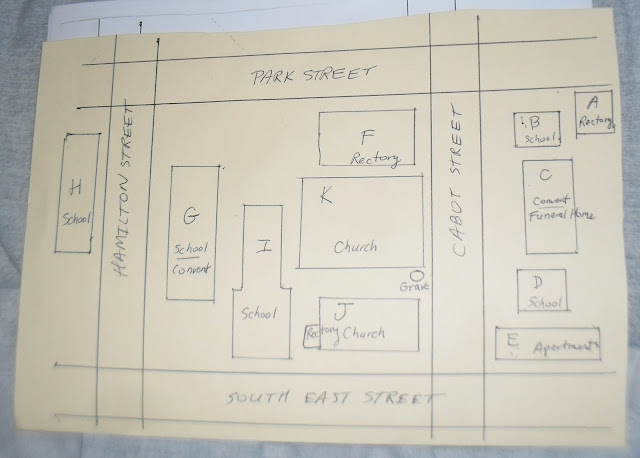 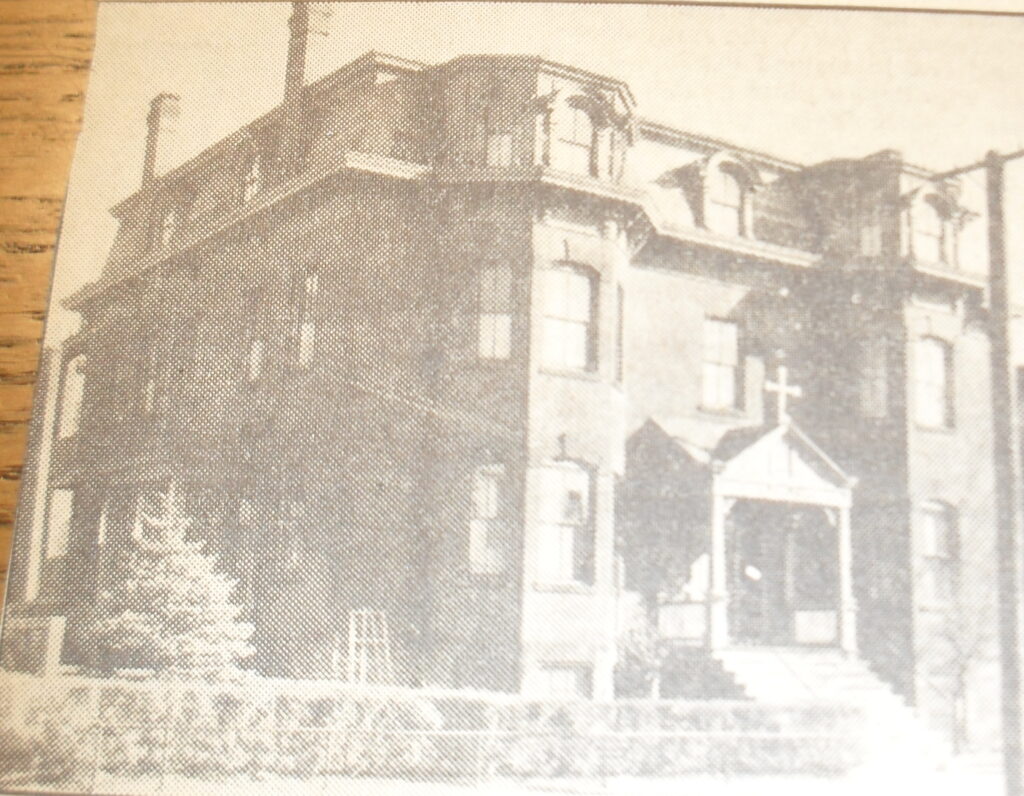 The pastor of Precious Blood had lived in the back of the wooden church in an attached annex (1870), then in the back of the basement of the brick church (1875), and then in a wooden home (A) along Park Street (1878).  In 1883 a full school for boys (D) was built across the street and a full school for girls (B) too.  These brick buildings flanked a convent (C) that was also built that year – Convent of Precious Blood.  The girls’ school flanked it to the west and the boys’ to the east.  By 1888 the Sisters of Saint Anne arrived from Quebec to teach both genders.  In 1894 a boys’ school (I) was opened on South East Street and its original building was given to renters.  The girls’ school would continue there until 1918 when they too would join the boys.  In 1940 the nuns would into a convent at the Park Street School (G) and the convent would become a funeral home – Blais.  Calixte Blais had started a funeral home in 1903 nearby and moved into this former convent with his family.  By 1984 he is in Chicopee.  All these four former Precious Blood buildings were razed in the 1980s and 1990s.  There was also an apartment complex in this block that might have been owned by the parish at some point. (E)

In 1891 Charles Crevier the pastor of the church had a modern rectory (F) built in a grand style.  The architecture is Queen Ann Victorian with a Russian dome for flare.  Father Crevier has hopes that he would be bishop some day so he wanted a grand home.  His parents also had money and had a summer home in Granby.  He inherited this home and land and in 1926 gave it to the Franciscan Friars. 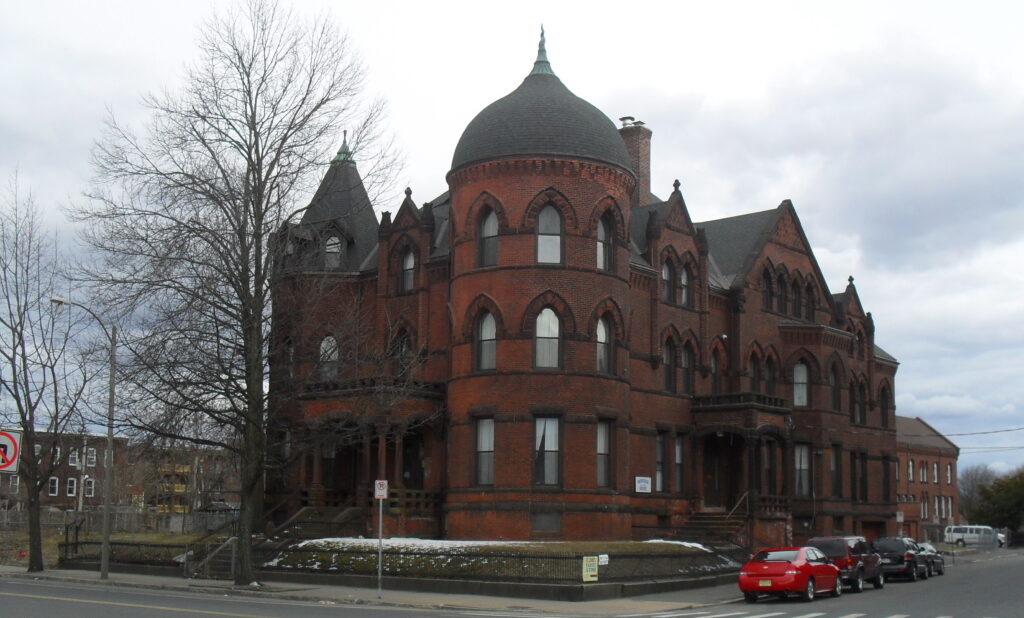 In 1979 the Precious Blood Church was sharing a priest with Sacred Heart Church and the rectory in that year opened a men’s charity home called Broderick House.  Where once there were 12 bedrooms, there are now 52.  Margaret’s Pantry and Saint Jude’s Clothing Home were placed into the back of the rectory in 1990. 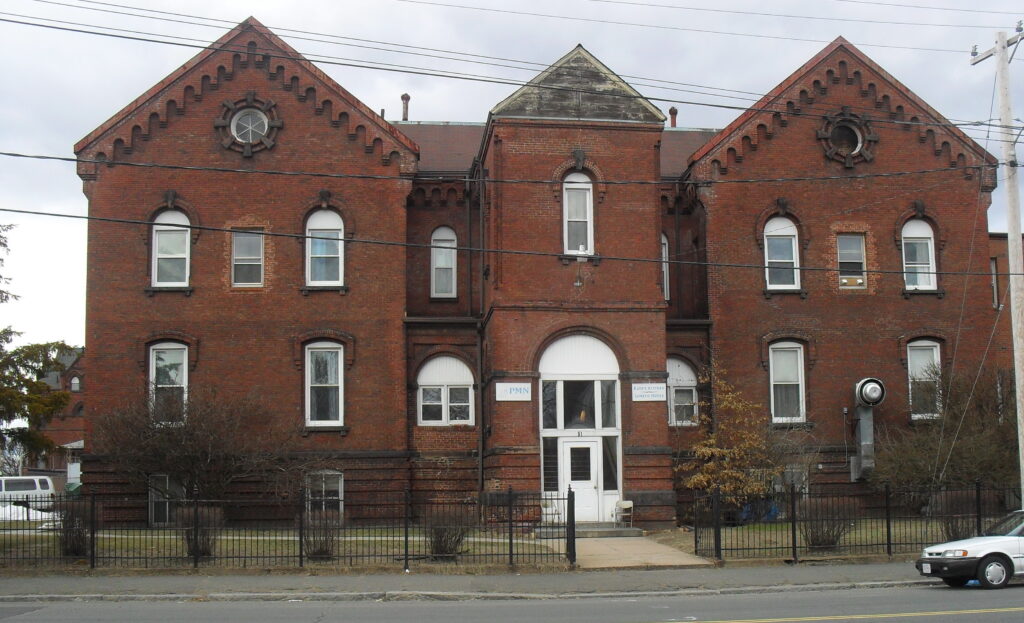 In 1868 the Park Street School was started.   In 1891 and for four years Holyoke attempted its hand at teacher training.  It happened in the Park Street School but was not a success.  In 1929 it was bought by Precious Blood and convent into a convent and chapel in 1940.  In 1976 the charity Casa Maria is started here by the Sisters of Providence.  In 1980 Kate’s Kitchen is opened in the basement.  In 2001 the Loreto House is started in the upper floors.  They had been at the Perpetual Help location since 1987 but the fire there forced a move. 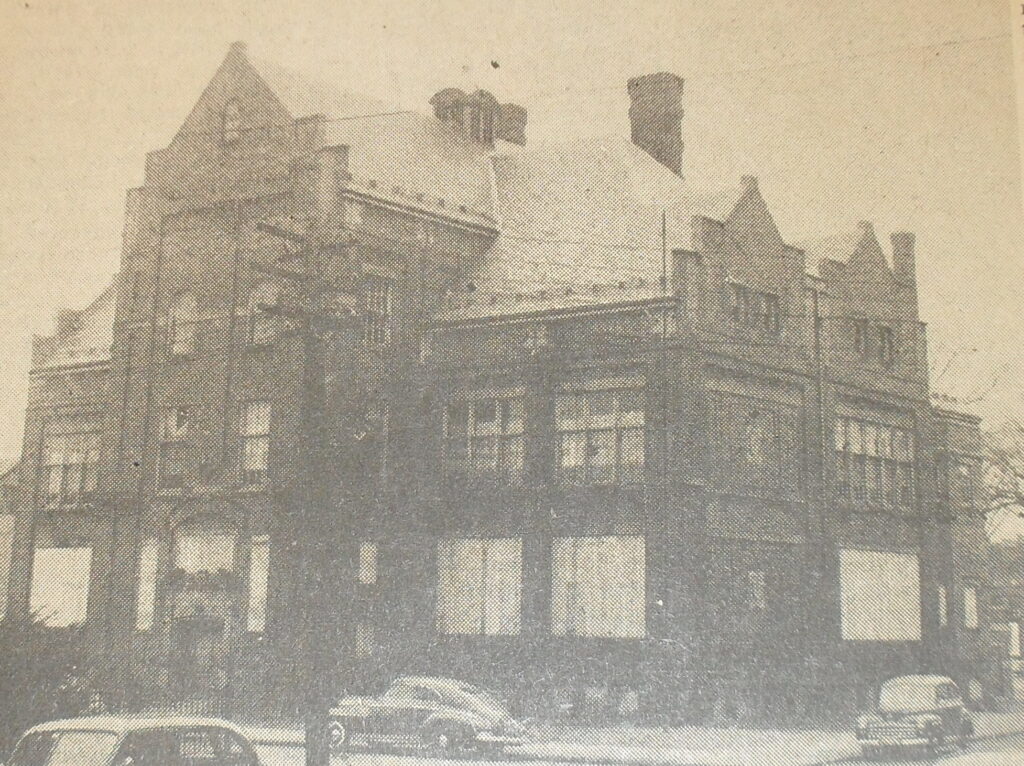 Across the street was the Hamilton Street School (H).  This school was built in 1887 as an elementary school.  Holyoke vacated the building in 1948 and sold it to the Catholic school in 1953.  Precious Blood High School moved to this Hamilton Street location in that year.  In 1971 PBHS closed for good and would join Holyoke Catholic High School.  In 1980 the school was razed. 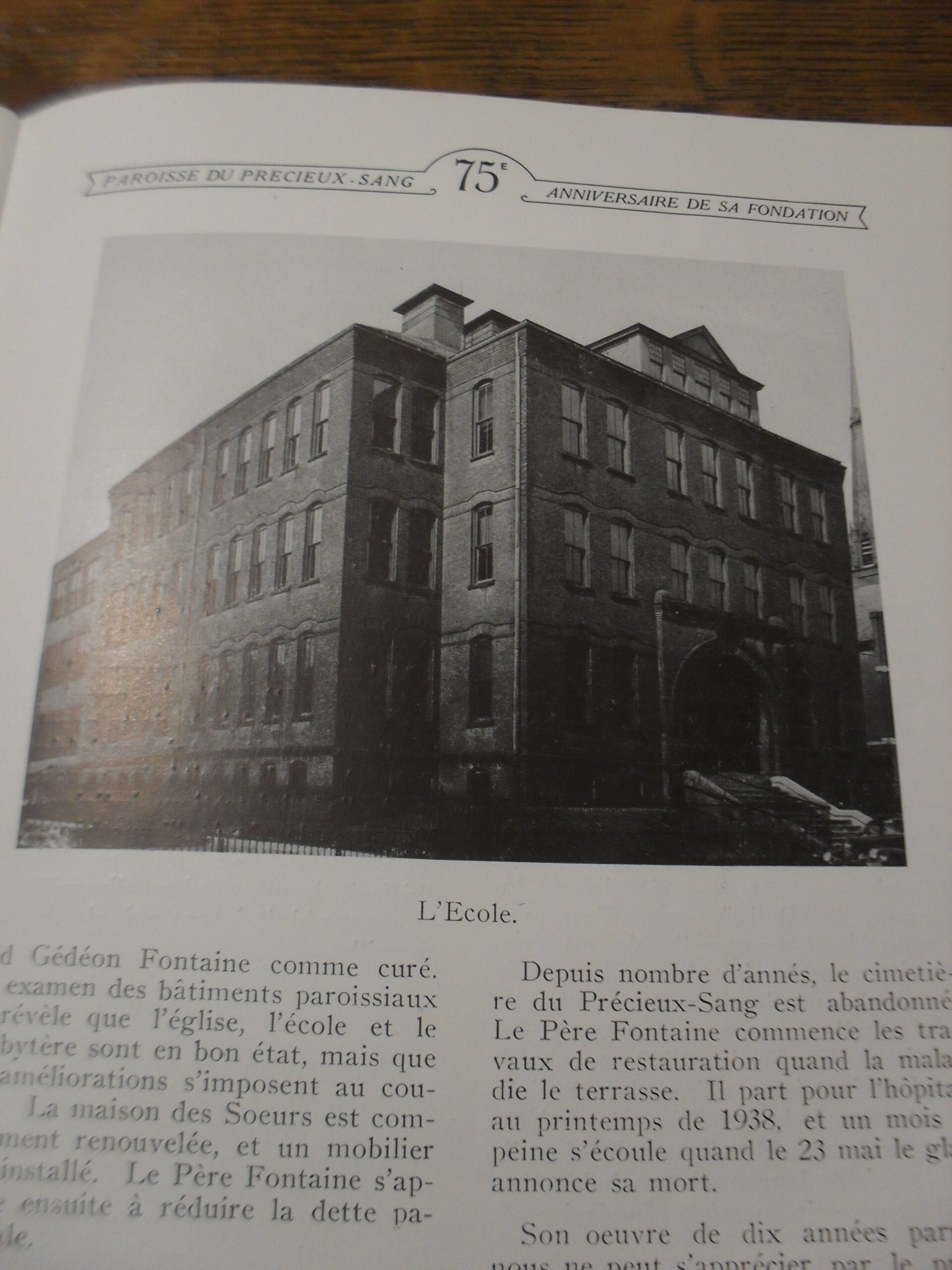 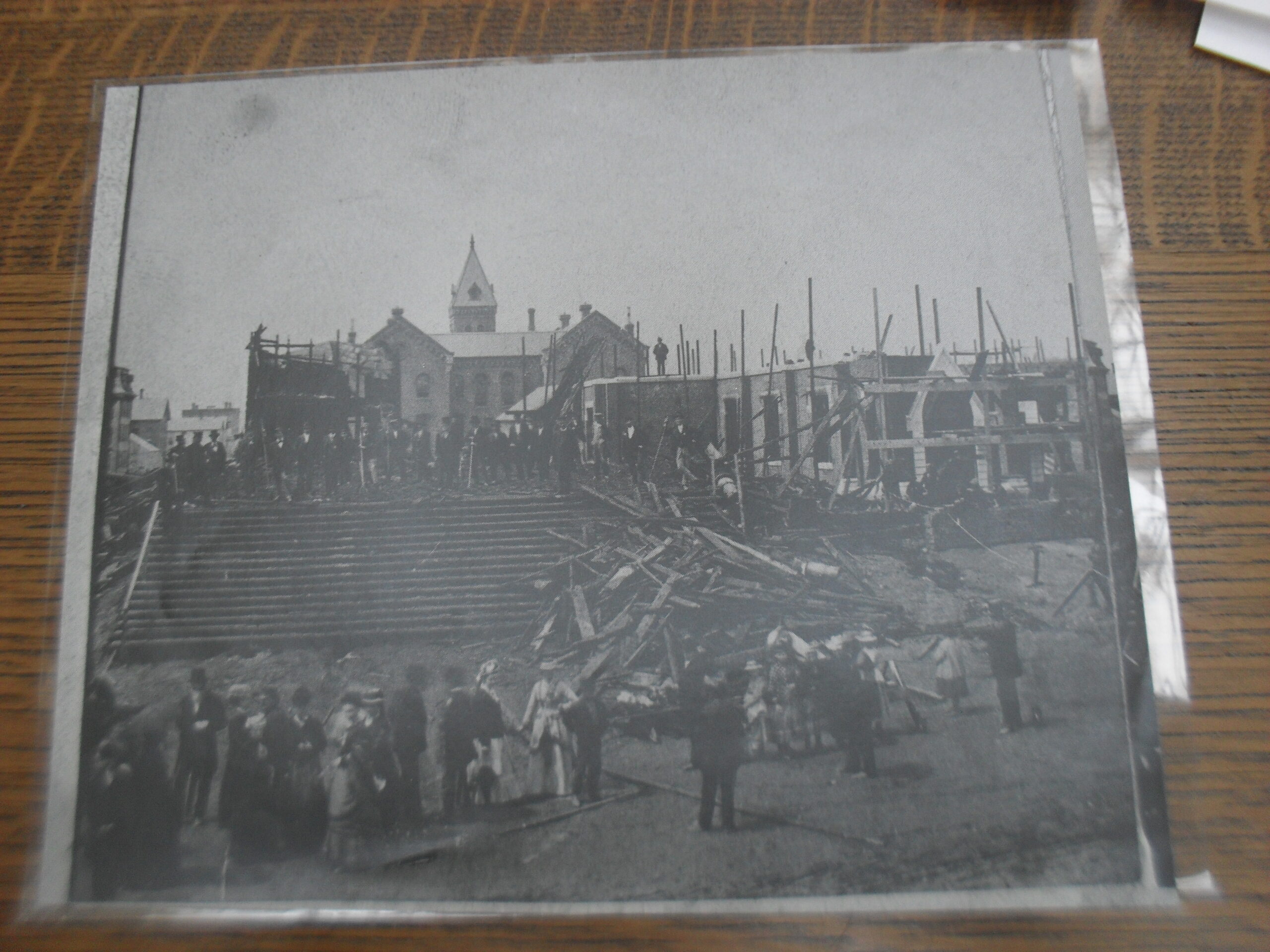 The story of the Precious Blood Church in Holyoke is one of tragedy and hope.  Immigrants from Quebec were coming into Holyoke by the droves by the late 1860s.  In 1868 the Precious Blood parish was born.  They used Exchange Hall on High Street for its first masses with the rectory across the street in Wright’s Hall.  Before that they had attended Saint Jerome’ Church.  The first priest was Andre Dufresne.  He determined that his parishioners needed a church of their own and had work started on a temporary wooden church (J) on lower Cabot Street.  This wood church had two floors with the upper floor being a loft.  It was first used on Christmas Day 1869.  Tragedy hit on May 27 1875 when a fire started in the front of the church.  Due to the rush on the people to the doors and chaos of the people jumping from the second floor – there was a great loss of lives.  71 people died in that tragedy making it the 6th deadliest tragedy in the history of New England.  52 of the dead were female with many of them being older teens and young women.  This was due to the eastern loft being used by single females had a greater distance to travel to get to the stairs at the west side of the church.  Also, there were more females in Holyoke than males since there were more young women immigrating to Holyoke due to more fabric mills hiring them.  In 1873 the Precious Blood Cemetery had been purchased in South Hadley.  48 of the dead were buried there in separate coffins but in a common grave.  In 2003 a memorial was finally erected there to honor all that died that day.  Their pastor who had once been buried alongside the church (in 1886) had been moved to a small mount above them.  This is because the church was taken down in 1989 and the priest needed to be moved.  The basement of the church had been renovated in 1956 to be Precious Blood Memorial Hall.  The Saint Jean Baptiste Society meets here.  The hall was dedicated to the fire victims. 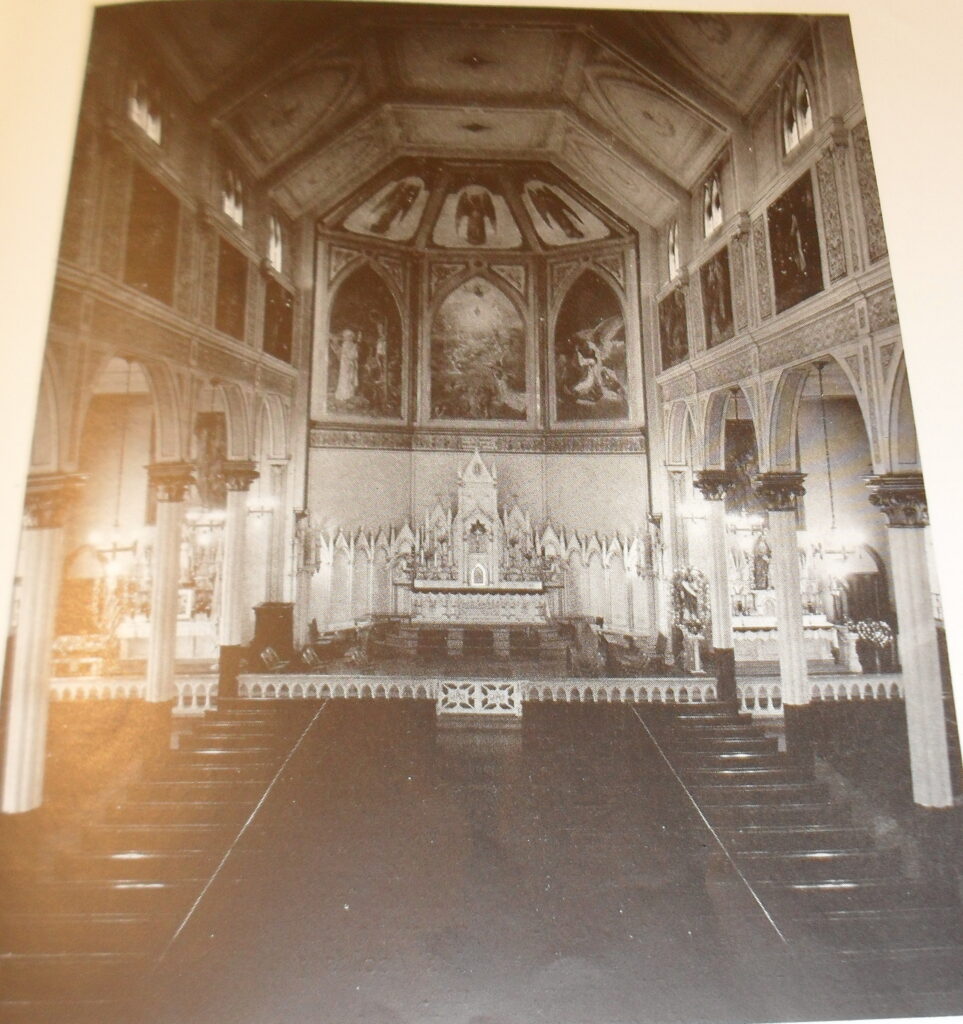 The masses were from that point forward held in the basement of the still not complete brick church.  In 1878 it finally opened as a completed church (K).  The basement was used as a multipurpose structure – Sunday school, church for masses, rectory, and hall.  Sunday classes had started in 1876 and were taught by the pastor and his assistant at first.  In 1878 the Grey Nuns arrived from Quebec.  They had religious vows that allowed them only to teach girls so the boys were instructed by the pastors still. 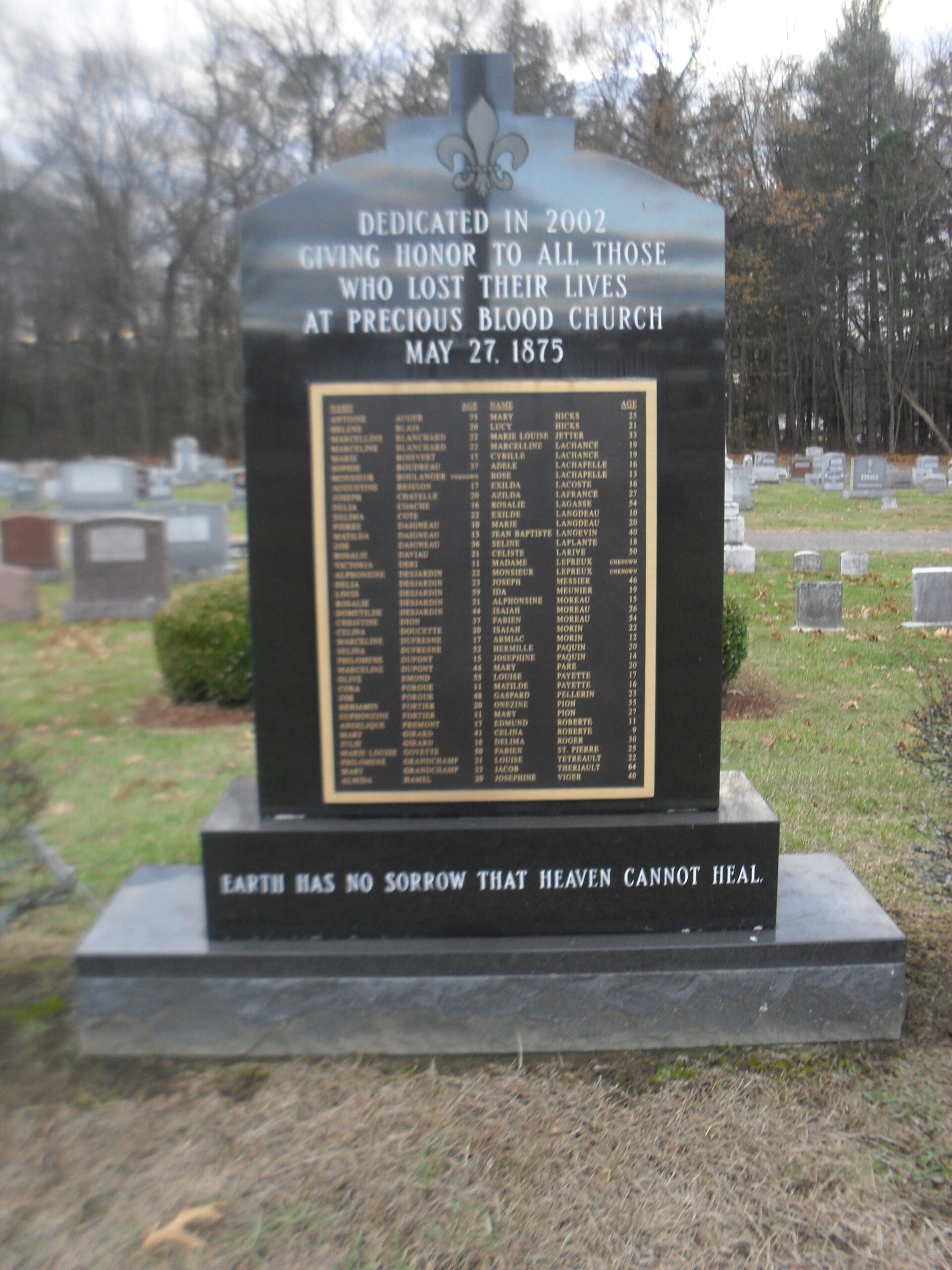 This stop means an extra trip to South Hadley.  The Precious Blood Cemetery is near the intersection of routes 202 and 33.  The link in the previous sentence will bring you to a page that will guide you through the tour.

South Holyoke was settled by many ethnic groups – Quebec, German, Jewish, and Greek.  All had churches in the area.