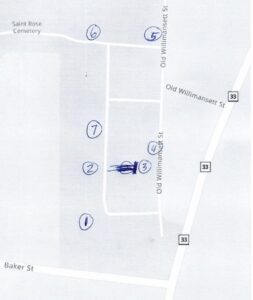 Precious Blood Cemetery in South Hadley was found in 1873 by the Precious Blood Church of Holyoke.  The first burial in the cemetery was not until 1875 when the fire victims of the church were buried here a couple of days after the May 27 fire.  The pauper section is adjacent to the mass grave for the fire victims.

Ovide Berneche and Hermine Giguere had 10 children in Chertsey Quebec and Holyoke.  Five of them died in infancy of childhood.  Four of them as the result of a lantern fire on the night of October 13 of 1900 in Holyoke. Only one child survived to adulthood.  All ten of the children plus their mother are buried near this spot.  (Findagrave) 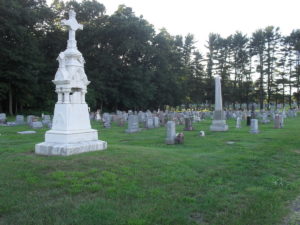 This memorial was erected in 2002 to the victims of the fire in the wooden church of Precious Blood in Holyoke in 1875.  71 people lost their lives that day due to the fire.  All were people of Quebec ethnicity and most were females.  Most were girls or young women.  Most of the French Canadian workers in the 1870s in Holyoke were females.  There was a great rush for the exit doors and due to this rush there was a bottleneck at the front left door.  56 of the victims were buried in South Hadley in a single grave opening.  Each had their own coffin and each had a separate horse drawn carriage.  15 of the victims were buried elsewhere including 8 in Quebec and 2 in Holyoke.  (Findagrave)

I have a research project that is attempting to find all the birth records of these fire victims to determine who they are.  Read my LINK here.

She has been named Etta, Ira, Isa, and Zitha in different contexts.  She is the only fire victim known to have her own gravestone.  The Francois S on the stone is her father.  She was like many of the victims a laborer in the mills.  (Findagrave)

Dugas and Bonneville joined Company D of the 2nd Masschusetts Regiment to fight in the Spanish- American War.  Dugas died of a wound and Bonneville died of malaria.  They were at first buried in Cuba but are now buried in Precious Blood Cemetery and now lay side by side.  (Findagrave)  They were moved due to the actions of a veterans group in Holyoke. 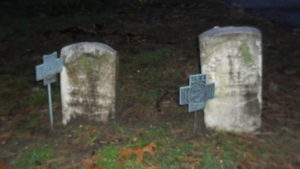 The Saint Rose Cemetery is down the dirt road.  It is slightly newer than this Precious Blood Cemetery.  There are many interesting stone so take a visit.

The Plains neighborhood of South Hadley is fun to visit.  Take a wander around. 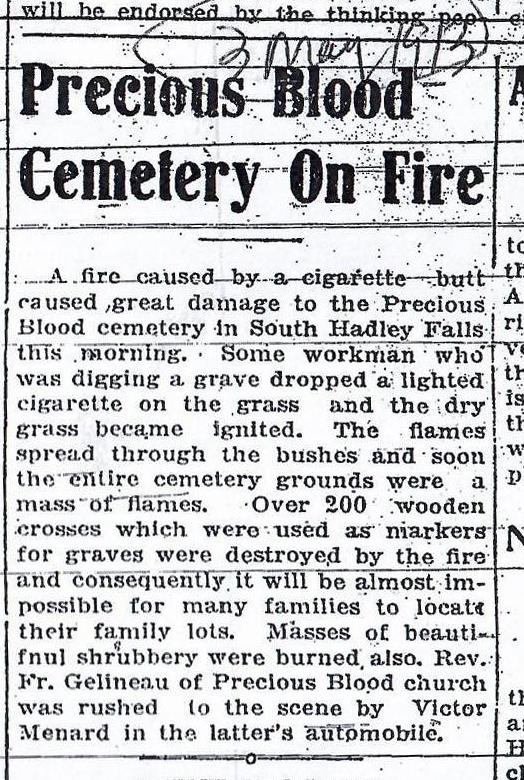 Some of the very oldest gravestones are in the back of the cemetery.  Amble around back there.  Walk to the southeast portion of the back of the cemetery to see the potter’s field area. On May 3 1913 a worker in this cemetery was digging a hole for a burial.  He placed his cigarette on the ground to dig the hole deeper.  The lit cigarette caught the grass on fire.  The entire cemetery caught on fire and 200 wooden crucifixes caught on fire too.  Many of the early burials are thus not known.