The Merrick Thread Mill was started in Holyoke in 1865.  At its peak it made 1 million miles of thread a year.  Its first mill in Holyoke along the end of the Second Level Canal and the beginning of the Third Level Canal.  It had an exposed race coming out of its mill.  Merrick Thread Mill number 4 was mostly for administration.  It is located across Main Street from mill number 1. 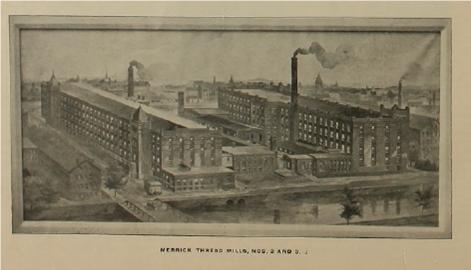 Merrick Thread Mills numbers 2 and 3 are between the First and Second Level Canals at Appleton Street.

Timothy Merrick started the Merrick Thread business in Mansfield Hollow Connecticut.  He moved it to Holyoke to gain an advantage on his competitors.  He was a great mill owner and grew wealthy quickly.  He built a mansion on the land that is now Blessed Sacrament Church.