[Travel along South Canal Street until you have Sargeant and Hamilton Streets equidistant from you on your west.  Off to the east is the juncture of the third level canal and the river.]

This location is the exit for the Third Level Canal into the Connecticut River.  There is no power station here since the canal system needs the third level as a safety valve.  It has five mills along it all built by the Newton Brothers.  The southernmost is the Chemical Paper Mill which is now called Hazen Paper.  To the north of that is the Newton Paper Mill which made cardboard.  Then along comes the Excelsior Paper Mill and the Springfield Blanket Company.  Sunoco Paper now owns these last three mills.  They specialize in recycling paper into cardboard holders.  On the northern side of the spillway was the Franklin Paper Mill.  Not all were paper products since the Springfield Blanket Company made blankets only for horses – they made at peak one million such blankets a year. 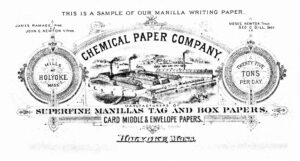 After the Newton Brothers made the Hampden Paper Mill in 1862, they then built, financed, and often managed 21 of the next 27 mills in Holyoke.  John Newton ran their construction company, James Newton handled the finances and was president of many mills, Moses Newton ran a few mills and was a mechanic and engineer, and Daniel Newton handled some finances and helped his brother John construct many buildings.

The drop in the water level in this spillway into the river is from 23 to 27 feet – the largest of the canal system.  The river continues to drop at a greater than normal rate and thus the races under these Third Level mills have a great drop too and consequently a great power generation.

Notice the beautiful bridge to the north over the canal.  This is the Stone Arch Bridge over the Third Level Canal.  It is 110 feet long and 40 feet wide.  It was built in 1889 a year after the Willimansett Bridge.  This bridge will be renovated during Canal Walk phase 3.  If you walk to the Chicopee end of the Willimansett Bridge and look back toward Holyoke, you will see the race water exits to the north and the Third Canal spillway water to the south.  You can also travel onto Water Street from Main Street to the outer bend of the Third Level Canal.  The view to the north is a fine one of the intersection of the second and third canals.  The view to the north is also fine.